Today is the winter solstice, for all of us living between the Equator and the North Pole. For the rest of you folks, it’s the summer solstice.

Since most of us live techno-urban lives these days, and don’t pay much attention to Nature, I find most people have only a vague idea what the Solstice really means.

Well, most importantly, here in the North, it’s the shortest day of the year. That means that from here on, the days will get longer, right on up till the Summer solstice in June, when we have the longest day. That’s why it’s traditionally a season to celebrate… the worst of the darkness is past, and brighter days ahead. Even though for most of us, the worst of winter weather is yet to come! That much, you probably knew already.

But there’s more. If you were standing on the Arctic Circle today, at 66 degrees North, the Sun wouldn’t rise at all. (If this sounds a bit familiar, I wrote a little about it a couple weeks ago, in a post about the Northern Lights.) In the South, of course, it’s just the opposite, today is the longest day, and at the Antarctic Circle, the sun will not set. 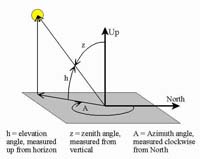 Also, for us in the North, the sun today will rise and set at the farthest northward point of the year. Which is confusing, because doesn’t the sun rise in the East and set in the West? Yes, but in the winter, it actually rises a little to the north of East, and sets a little to the north of West. On the Equinox, it travels directly East to West. Then, in summer, it rises a little toward the south. If you watch sunsets through the year, you’ll see that the point where the sun touches the horizon is not always the same.

During these short days, the sun stays fairly low in the sky, and its rays are less intense. In midsummer, it rises toward the zenith, and its rays beat straight down at us, delivering more concentrated heat. All of this happens because the Earth is tilted, 23 degrees, relative to its path around the Sun. If that weren’t the case, if it stood straight up, so to speak, none of this seasonal stuff would be happening at all.

It’s all kind of confusing, when you’re not used to it! Wikipedia has a pretty good explanation of the Solstice, with pictures. Or for more about how to observe the movements of the Sun, check out solsticeamateur.com, where I found this cool diagram.

I also noticed today that the tide is especially low out here in the cove. I’m seeing sand bars I don’t usually see, and the river that runs through the shallow spots at low tide is barely a trickle. Now, is there any relationship between the solstice and the tides? Not that I know of. But I have a friend who insists that good weather for flying balloons always occurs on the Full Moon. That doesn’t seem to make sense either. And a reader of another publication I write for sends me frequent messages about solar flares, wondering if they affect things like volcanoes and earthquakes, and even people’s moods. It doesn’t seem to make much sense, but who knows?

We are really not so smart about a lot of things as we like to think. Maybe that’s the best reason for stopping now and then to notice what Nature is up to, and wonder what the heck is going on. A little reminder to be humble.