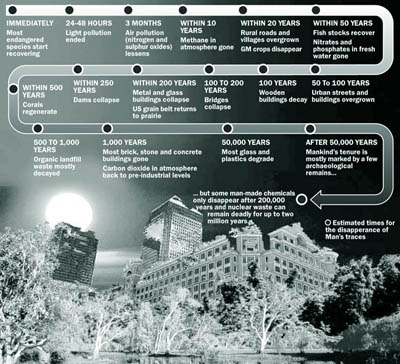 This is one of those things that has zoomed its way across the blogosphere at light speed. New Scientist, the venerable UK magazine, asks in this week’s cover story — What if Earth’s 6.5 billion people left en masse tomorrow for another galaxy, would their footprint on the planet ever fade away completely?

First, the lights would wink out. Roads, dams, and buildings would begin to crumble. Wildlife, forests, and fish would thrive. After about 100,000 years, NS says, alien visitors coming to Earth would find no obvious signs that an advanced civilization ever lived here.

Alex Steffen, at worldchanging.com, debunks the exercise as counterproductive… well, as he put it: “toxic… poisonous…dysfunctional.” Let’s imagine instead how humanity and nature can thrive together, he says.

The question is not a new one… Discover Magazine wrote about the same scenario in February 2005.

The graphic is from the Times of London, click on it for a larger version.