Galápagos Islands on Unesco Danger List due to Mass Tourism 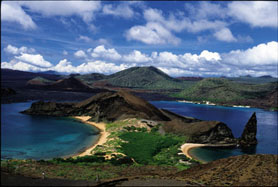 News that the Galápagos Islands, the world’s first World Heritage Site, are under threat has again put mass tourism in the spotlight.

The Galápagos are a cluster of volcanic islands in the Pacific Ocean sitting just west of Ecuador, South America. They are best known for their wealth of unique native species and are thought to have instigated Darwin’s theories on evolution and natural selection.

Recent Number of Visitors To the Islands

Visitor numbers to the islands have grown from 40,000 in 1990 to 145,000 in 2006, that’s a 250% rise and as a result Unesco has added the archipelago to its ‘in danger list’, specifically citing the fragile ecosystem and the negative effects of a sizable growth in tourism.

“Unless we start to make fundamental changes right now, in the next 10 to 15 years we will see the Galápagos suffer from both economic and environmental degradation,” said Dr Graham Watkins, Executive Director of the Charles Darwin Foundation, whose mission is to conserve the Galápagos through scientific research.

He co-authored the 2007 Galápagos at Risk report for the Darwin Foundation and found that the islands’ crisis is not only a direct result of the rise in tourism but also from a change in the type of travellers visiting the area.

“Early tourism in the Galápagos was characterized by nature-loving tourists,” the report said, seeking “to learn about Darwin and see the amazing species that helped him to develop his theory of evolution.” It noted that these guests were “easily accommodated by smaller, locally owned tour operators.”

The study also highlighted that the new type of ‘ecotourists’ often preferred the level of comfort available from large tour operators and vessels. As a result local owners just can’t compete with the mainly foreign-run market. Of the $418 million generated by tourism annually in the Galápagos, only $63 million is estimated to enter the local economy. And of the 80 tourism boats allowed to operate in the Galápagos, only around 40 percent are locally owned.

One company, Voyages of Discovery, was allowed to carry 500 passengers per month until their permit was revoked last year, which they found hard to deal with. Mr. Flager vice president for sales, marketing and passenger services at Voyages of Discovery said, “Some of our customers even cleaned up one of the beaches in San Cristóbal of litter one day without anyone asking them to do so,” adding that Discovery’s passengers were all “moved by the grandeur of the Galápagos” and returned home as environmental ambassadors for the area.

But Dr Watkins argued, “The big boats are basically hotels that sit in the port. Those passengers are not staying in locally run hotels or eating in the local restaurants.”

Johannah Barry, president of the Galápagos Conservancy, which supports preservation and research in the Galápagos, including the Darwin Foundation’s work, commented, “I don’t want to say that only Birkenstock types can come here. It is just that now it has been Disneyfied, and the high number of people visiting is leading to a different type of experience. It becomes less reflective of the surroundings.” She added that all the boats waiting to ferry passengers ashore takes away from the natural scenery.

Other Threats to the Micro-Ecosystem

Other threats to the area are increased risk of infection and introduction of non-native plant species, which can lead to severe problems with the native biodiversity. Even planes have to be sprayed to kill off any insects that could intrude and harm the delicate ecosystem.

What You Can Do

So, if you intend to visit this diverse group of islands remember to go local, stay in small family-run hotels or guesthouses and spend money within the community, that way it will ensure the Galápagos remain as Darwin saw them, pristine.