If it’s cold or rainy, visit an aquarium

While bad weather can actually be a great time to be outdoors, if you’ve had enough already, then a visit to an aquarium can satisfy some of your curiousity about the natural inhabitants of a place while keeping you warm and dry. A few aquariums are well-known and hard-to-miss… the one at Monterey Bay in California, for example… but many others are fairly obscure and could be easily overlooked unless you seek them out.

Also, I’ve found that a lot of these small organizations don’t always do a great job at self-promotion. You could walk into the place, look around, shrug and move on, not even realizing that they have some phenomenal or unique stuff there, just because they haven’t really thought about how to let you know.

So doing a bit of online research before you get there can pay off. Then you’ll arrive with some background, and once you ask an intelligent question or two, you’ll likely find the staff will be thrilled to show off their collection for you. And you won’t have that bleak experience of getting home only to find out there was something there you’d have really liked to see, but missed it! They also might have special events, movies, lectures, boat trips, that you can catch, so a little pre-planning can pay off.

The Ocean Project has a listing of aquariums around the world at its Web site. These aren’t even all the aquariums, but all the ones that belong to TOP, which helps to promote the sites and organizes World Ocean Day (which is June 8, 2007, mark your calendar!). And they’re not all on the coastline, either… one of the largest is in Atlanta, Georgia, which is pretty far inland. And they are found around the world, in Europe, South America, and Australia.

Here in New England, we have two great aquariums, the one in Boston, which is right on the waterfront downtown, and one in Mystic, Connecticut, which is near the coast but not in sight of the sea. They are always interesting to visit, either with friends or with kids, and they have lots of educational programs and fun stuff to do. Mystic used to have a popular show with its beluga whales, showing off tricks for the audience. That approach has changed, and now instead vistors can actually have a close encounter with the whales, getting into the pool with them and even patting them on the tongue (apparently this is something the whales really enjoy!). 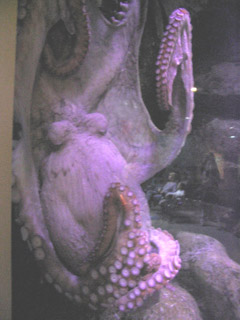 In Boston, the aquarium consists of one giant tank, with a spiralling ramp taking you from the depths to the shallows. They also have frequent whale-watching trips that depart from the dock, to take you to Stellwagen Bank, an offshore protected area popular with a variety of whale species.

When I was in Alaska a couple of years ago, I visited the Alaska Sea Life Center in Seward, a tiny little tourist town and fishing port south of Anchorage. That’s where I got this awesome photo of an octopus. I learned that these deep-sea creatures are very mysterious, and scientists don’t know much about their behaviour or even their life cycle. At the time I was there, the staff was trying hard to get some of the octopii to reproduce. You can read more about their efforts here.

Just about anyone who visits an aquarium or a zoo, anytime and any age, I find, is amazed at the diversity of creatures that share our planet, and that are so unfamiliar to us, as if we live among aliens. So go, and be amazed.