When “Crocodile Hunter” Steve Irwin died recently after an encounter with a stingray, it wasn’t because he didn’t know the creature could be dangerous. But how much do you know about the wild plants and animals in the places where you travel? Could any of them be potentially harmful?

It may be that our fascination with the plants and animals around us derives partly from an evolutionary imperative — the humans who didn’t know what to exploit and what to avoid, didn’t survive.

Here’s a National Geographic video about swimming with stingrays. If you saw this, and didn’t know about the lethal attack on Irwin, would you think they were killers? Sometimes survival (or death) is just plain luck.

If you’re wondering what to watch for on your next trip, Wikipedia has a useful compendium of organisms that are dangerous to humans. The list features animals that will attack and eat you, ones that might hurt you in self-defense, and venomous ones. Plus poisonous plants, unpleasant worms, and nasty micro-organisms. It’s creepy all right, but wouldn’t you rather know, than not know? 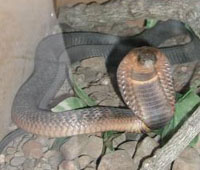