When you fly, do you take an aisle seat or the window? True eco-travellers, I’d bet, will always go for the window, to take advantage of that unique view of the world. This week, NASA offers some extra reasons to not miss that out-the-window opportunity. 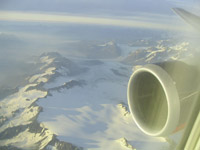 Atmospheric optics expert Les Cowley told NASA a few things to look for, that you can only see from your seat in the sky.

“Both sides of the aircraft have their own sights,” says Cowley. “On the side opposite the sun, the main thing to look for is the glory. Clouds below the aircraft are required. They are the canvas on which the glory is ‘painted.'”

“Look toward the antisolar point, the place in the clouds directly opposite the sun,” he instructs. “There, if the aircraft is low enough, you will find the shadow of the plane. Surrounding the shadow is the glory — a bright white glow surrounded by one or more shimmering rings of color.” I’ve seen this a few times myself, once when flying along the California coast from San Francisco to Monterey in a small airplane, and once over Florida in an airliner. Go to NASA’s Web site for a great picture of what he’s talking about, and lots more about what to look for out there. 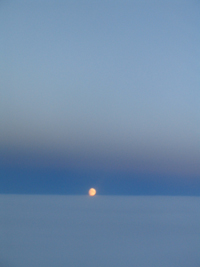 When I was flying back from Alaska a couple of summers ago, on a late-night flight, I watched out the window as the glowing, almost-full moon rose above a cloud layer. The sky turned deep shades of purple, the clouds were infused with a gentle light. That’s something you just can’t see from our everyday vantage at the surface of the earth. I looked around the cabin, and right behind me a young couple was also watching outside, but most everyone else already had their shades drawn and their attention elsewhere.

When you travel, even if you’re not on vacation but just have to get somewhere, think for a moment what an incredible experience you have when you step aboard an airplane. We all might hate the cramped seats, the noise, the bad service, but right there at your window you have access to a view that 99.9999 percent of all the humans who ever lived, never had a chance to see.