The Japanese culture of whaling and sashimi 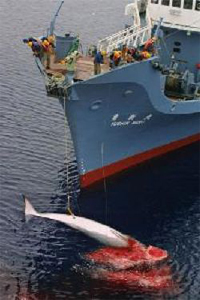 Whaling has been popular in Japan for centuries and in recent times the country has been asked to explain their questionable fishing habits. Those involved in whaling claim it’s all done in the name of research, and to make sure no one thinks any differently they have the word ‘RESEARCH’ emblazoned on the side of their whaling ships.

The idea is to determine a sustainable level of whaling. So, why is it then that after decades of research they are no further forward in the knowledge of minke whale management?

Enviromental activists such as Greenpeace are struggling to ban the practice as it’s thought the whales are killed purely for their meat.

This begs the question for all you eco travellers who’ve been dreaming of visiting Japan for several years and are partial to a slice of sashimi… would you eat whale? After all, tuna is bordering on the endangered list but it still ends up travelling round every sushi bar conveyor belt. 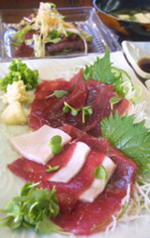 Andrew Darby, of Melbourne’s leading newspaper, The Age, reports 7,000 minkes were killed in the first Japanese Antarctic Research Program (JARPA) and after a committee represented by 31 countries found JARPA has done nothing to improve the management of minke whales in the Southern Ocean he declared their actions shambolic. To make matters worse JARPA II is now moving in on the threatened fin and humpback whale species.

In 1987 there was an international outcry after years of campaigning to ban the practice of whaling by environmentalists, so using a loophole in the International Whaling Commission’s rules and regulations, the Japanese Government issued research permits allowing the capture of 300 minke whales every year in the Antarctic for research purposes, thus, they thought, avoiding any more speculation on their whaling rituals. To avoid any ruckus, fishing companies chartered their whaling vessels to the Institute for Cetacean Research; the factory ship was labelled the fleet’s lead research ship, other fishing vessels with industrial-sized harpoon equipment were renamed sighting-sampling vessels and when a minke was caught, packed and frozen it was called ‘the by-product of research’. They had it all sorted. Until now.

Humpback whales are a whale-watcher’s nirvana. Their grace and poise in the water, feeding techniques and size draw enthusiasts to observe their migration and meal times but Japanese whalers have decided that, because their population is increasing, it’s having a damaging effect on the minke population. To rectify this they decided to cull 50 humpbacks a year.

Hieeki Moronuki of Fisheries Agency says, “Taking 50 Humpbacks from a population of tens of thousands will have no significant impact.” That’s what was said about cod.

In Japan a leading professor, Toshio Kauya, spoke out, saying that earnings from whale meat covers the cost of construction of whaling vessels so to stop now would mean financial ruin for the shipping company and ridicule for the research program. In fact, The Age reports Mr Kauya as saying, “Scientists were told in the 1980s to manipulate the quota of whales needed for research to ensure the program continued for as long as possible.”

To date, Japan has killed approximately 10,500 whales and doesn’t have plans of curtailing their ‘research’ in the near future.