Your eco-tourism vehicle of the future?

How’s this for the perfect way to sight-see… drifting above the treetops, in a quiet and maneuverable aircraft, that’s easy and fun to fly? Dan Nachbar, an aviator in Amherst, Mass., has built just the ship for eco-touring.

Dan says his aim in building his one-of-a-kind hot-air blimp was to create the perfect vehicle for experiencing “the restorative value that comes from just being in the sky.” He’s thinking of fun flights, often made in the evenings, after work, that don’t go anywhere in particular. “The ‘mission’ here is not transportation. The mission is joy,” he says.

The blimp is unique in that it has a rigid internal frame that can be folded up for storage. The blimp itself also folds up, so it doesn’t require a hangar like a helium-filled blimp would. Unlike a hot-air balloon, which can only drift with the wind, the blimp is maneuverable, so the pilot can fly where he wants and return to land at the launch site, if that’s the goal. The engine is mounted near the tail, which Dan says provides nimble maneuverability.

The blimp first flew in October and has accumulated about 10 hours in the air since then. Dan says he is at work on version 2, which will have a quieter engine and hot-air system, to enhance the serenity of flight. Eco-tourism and research are two possible uses he envisions for the final version of the ship.

The project has won high accolades from my friends in the lighter-than-air community who’ve seen it. I’ve spent a few daydreaming hours myself, trying to imagine something like the aerial equivalent of a sailboat. Dan has come pretty close to that vision. 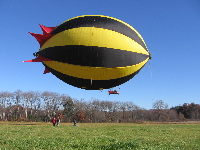