The Great Ocean Road in Victoria, Australia has a number of eco-friendly travel options. Recently, I visited an ecolodge on Cape Otway, 3hrs from Melbourne, which manages to completely encompass the true values of ecotourism. 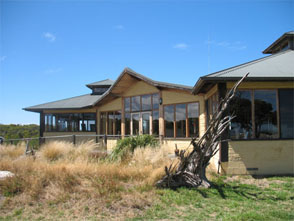 “Don’t move”
“Stay completely still and avoid eye contact.”
We happily obliged and stood as still as children playing ‘1-2-3 Red Lights’, which I suppose, if you think about it, isn’t that still at all. Only a few untrained muscles wavered which we hoped the male leader of the kangaroo pack didn’t notice. He was merely a car’s breadth away and because we’d just been informed of their strength and territorial tendencies we thought it best to listen to Shayne, our knowledgeable bush guide.

We stared at the ground with submissive lowered eyes and awaited further instruction. Even, Wombie, the gentle giant Ridgeback crossbreed sat obediently facing his master waiting for the command to walk on.

Twenty pairs of kangaroo eyes bored into us as they glared on in a ready-to-sprint mode, but we weren’t even slightly worried. In fact we were relishing being able to get so close to this extended family of roos. Ordinarily they would have hopped off at the first sign of us but this time it was different for the magnificent adult marsupial standing 10 feet tall in front of us was Big Buck, Cape Otway’s first orphaned joey who had been nursed back to health by our guide Shayne Neal and his wife Lizzie Corke, co-founders of the Great Ocean Ecolodge and Cape Otway Centre for Conservation Ecology.

Cape Otway is located to the south of Victoria, where the Bass Strait and Southern Ocean collide. For thousands of immigrants from Europe in the 19th century Cape Otway was the first sight of land after many months at sea. Many perished in shipwrecks on the Cape, only hours from their destination, so in 1848, after a few attempts to cut through the dense forest to the Cape, a road was built and a lighthouse erected on the towering cliffs to warn and welcome sailors. It is here, on the same stretch of road, towards Cape Otway Lighthouse, that you’ll find Cape Otway’s Great Ocean Ecolodge.

We had arrived at the Ecolodge a few hours earlier and had been greeted by a babysitter in hushed tones feeding an infant. Tiptoeing gently across the creaky wooden floorboards, not wanting to scare the little one, we introduced ourselves and peeked into the swathes of blanket to see a five-month-old swamp wallaby sheepishly looking up at us. Not something you see everyday.

The tiny orphan had been brought to the ecolodge just four days before when it was found beside its mother who had been killed on the road. It’s a regular occurrence in Australia and unless orphaned joeys are saved by passers by they usually die from starvation. 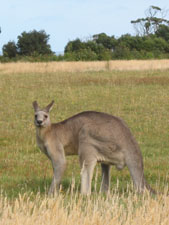 Wallabies, like kangaroos, depend on their mothers for everything until they are about 9 months old. There is very little difference between the two species; both are marsupials belonging to the Macropodidae family and develop in the same way. Their emergence into the world is quite amazing. When an embryo reaches two weeks old the female Macropod, or doe, releases it from a holding pouch and instinctively the little joey, which is technically still an embryo and no bigger than a jelly bean, grabs hold of the fur and crawls up into the mother’s pouch and latches on to a teat for the remainder of it’s development.

At any one time a female kangaroo can be raising three joeys. She may have one in her holding pouch, be nursing one in her pouch and one skipping around out of the pouch.

She is also able to feed two joeys at the same time. By tasting the waste of her young she is able to tell what nutrients they need and can produce milk specifically for each joey. So, out of one teat she can produce milk for her still developing joey and out of another teat produce entirely different milk for her older joey that isn’t able to completely fend for itself yet.

Red kangaroos, found in the hotter areas of Australia like the Northern territory, are able to save their fertilised joey in an eight cell state until the rains come. This could be for a period of a few weeks, a few months or well over a year. As soon as the first rains fall the female roo can activate the joey’s production at will.

We discovered this on our entertaining and educational dusk bush-walk that is included in an overnight stay at Great Ocean Ecolodge. Shayne, who is a nature resource conservationist, led us through the bush behind the lodge. Using a telescope we observed koalas resting and feeding high in the eucalyptus trees, a lone female kangaroo feeding in the open with her baby joey, not quite ready for the world, poking its head from the pouch imitating and learning from its mother. We learned of the natural flora and fauna in the area and what species have been reintroduced to the area since Lizzie and Shayne left the land to nature after years of being trodden by grazing cattle – rare and native plants and animals have now returned to the land and are positively thriving. 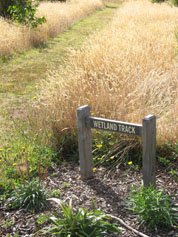 It was on our return from the bush walk we encountered Big Buck and his family grazing before heading back into the bush for bedtime.

Our grazing time was looming too so we stole a few minutes in our suite overlooking the kangaroo fields to relax before dinner. Well, we tried to relax. Kangaroos are like babies, if there’s one around it’s impossible to ignore it, so our relaxing time was spent straining to see the kangaroos outside.

Dinner was served in the main room overlooking the grounds and across the Otway Ranges. There were two choices of main meal and two choices of desert so Dan, my husband, and I choose one each to make the most of the night. I had gnocchi with pine nuts in a cream cheese and herb sauce and Dan went for the green Thai chicken curry. We both opted for the home-made apple and raspberry crumble with custard. Well, who wouldn’t? The wine list included a good range of locally made wines which I thought very fitting for an ecolodge. We opted for a 2003 Otway Ranges Cabernet Merlot and made note for future reference as it was one of the better wines we had tasted since arriving in Australia.

Outside a kookaburra swooped by, catching its own dinner and instigating renditions of the popular scout round song Kookaburra Sits in the Old Gum Tree. And just as we scraped the last of the crumble from our plates the kangaroos rounded the house to the fields beside the dining room to keep us entertained till dark.

With our feeding time complete, it was to feed the rest of the inhabitants. First up was Tink a four week old joey. She was kept nestled in two hats and a thickly insulated pouch within an incubator which was kept at 36.7°centigrade, the same natural temperature as humans. Her eyes and ears were still fused and she sucked on a teat between feeds as she would do naturally in the pouch. They hope she survives but it’s difficult for one so young, no matter how much tender loving care they receive.

Next up was Pixie, the little swamp wallaby that was being fed when we first arrived. Like babies, they need to be fed four-hourly (including through the night) for the first few months to ensure their survival. 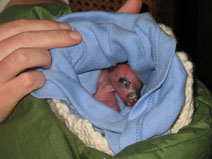 Lizzie and Shayne obviously have a genuine love for what they do. It’s evident in their commitment to nursing the animals in their care and in their efforts in leading a sustainable lifestyle.

The Ecolodge is constructed to have minimum impact on the environment and was built in “two years and one month” using mud brick and recycled wood. A passive solar complex produces all the electricity and hot water required to run the five bedroom lodge; the only bought resource being a gas cylinder for the cooker. Water is diverted from rainwater storage tanks and any used is recycled – all grey waste water from showers and sinks is treated in an aerobic plant before being recycled to water the garden and fire breakers that protect the house from bush fires. The building itself is designed to optimize cooling in the summer and retain heat in the winter. They also grow their own veggies in a patch which is rotated and aerated by chickens.

The chicken shed also houses the lodge’s free wake up alarm system, in the form of Rocky, the rooster. The night we stayed Lizzie had a 5am start to feed the joeys and asked Shayne if everything was done for the day and prepared for the next. Feeling proud with himself Shayne assured Lizzie he had indeed everything set to go and she needn’t worry about a thing. This included removing the rooster from the shed in the veggie patch behind our bedroom wall. Come dawn we were awakened by the loud crowing of a rooster, which wasn’t the worst thing that happened that week; prior to visiting the Ecolodge our wake-up call was the incessant drilling of a jack hammer, so we rolled over and went back to sleep. It was at that point that too that Shayne discovered he had taken the hen from the dark shed the night before not the rooster after all.

Even with all the crowing we still managed to sleep in and miss the kangaroo’s morning graze. Breakfast was a continental affair which was perfectly adequate as we were still attempting to digest the generous feed from the night before.

We were welcome to hang around the lodge and bush till the afternoon so took the opportunity of having a wonder with our kitbags and binoculars, keen to see what else the area had to offer. We didn’t run into Big Buck again but spent a glorious sunny morning discovering the mini ecosystem around the Great Ocean Ecolodge, which is not only a wonderful learning resource and relaxing getaway but also a shining example of how the actions of just two people can make a difference in the world.

Price: It costs $300 per night for a double room; this includes a guided bush walk, dinner and continental breakfast.