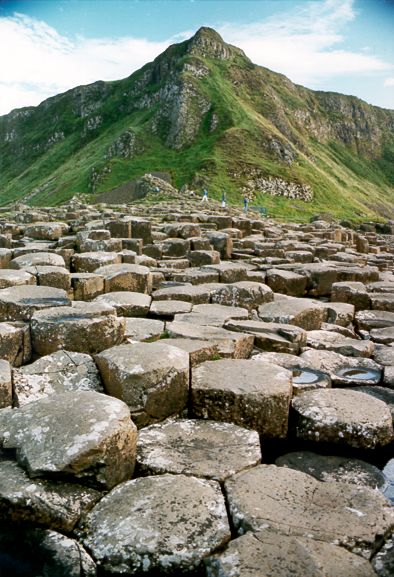 Northern Ireland, a green getaway in the colourful sense of the word, is turning out to be something of an eco destination with travellers keen to discover the sunnier side of the once troubled province.

Yes, Northern Ireland has had problems and there’s still a little fine tuning going on but now that the peace process has been sorted and an independent government is in state the region is safer than ever before for travellers. In fact, it was voted as the safest region in the UK and the second safest country in the world by the United Nations.

Now visitors are heading to the North in their droves, curious to see what’s on offer. Trust me; it’s not all red-bricked housing and murals.

Northern Ireland is tiny. It takes about 1and a half hours to drive from one side to the other and only a few hours from top to bottom so you should be able to get the whole way round in a week, visiting all six counties but with the abundance of places to visit you may need longer.

The Mountains of Mourne

This granite mountain range to the south east of Northern Ireland has been a designated Area of Outstanding Natural Beauty since 1966. It’s a haven for hillwalkers, rock climbers and cyclists, is abundant in wildlife and has over 350 ancient monuments to explore. Pitch a tent wherever you fancy and enjoy.

Covering an area of almost 630 hectares, Tollymore, at the foot of the Mourne Mountains, offers panoramic views down to the sea and has countless paths, nooks and crannies to investigate.

To the north of the province, ramblers and cyclists will love the walks and routes through the Glens of Antrim, past waterfalls and up to mountain tops for a view of the surrounds. On a sunny day Scotland is clearly visible to the northeast.

The Historic Walls of Derry

One of the finest examples of a walled city in the whole of Europe, the Derry Walls were built to protect against invaders in 1613-1618 and are still intact to this day, along with

the original cannons. Placards placed around the 1.5km of walkways explain the history of the walls and surrounds.

If the weather gets cold, wet and windy, as is often the case, keep warm and toasty in one of the many old pubs at the foot of the walls.

Explore the natural lakes, reed beds and woodlands of this 150 acre site and discover how environmental problems can be tackled in a fun and interactive setting. The Centre itself uses alternative technologies, such as solar panels and wind power, to fuel the entire site and has electric powered bikes for use within the area.

Another Area of Outstanding Natural Beauty, Ards Penninsula is a mecca for sailing, golfing and horse riding

Located just outside Dungannon in County Tyrone, Peatlands Park relays the history and facilitates awareness of the natural resource that has been forming in the area for over 10,000 years.

Discover a fascinating natural underworld of rivers, chambers and waterfalls in this UNESCO Global site in County Fermanagh. Stay around the area for a while and sail, canoe and explore the lakes and islands of Northern Ireland’s Lake District.

Sitting on the edge of the Antrim coast is a series of 40,000 basalt columns formed after a fierce volcanic eruption. Almost every column is hexagonal in shape and forms great natural stepping stones in an area steeped in myth and legends. Only a few similar formations exist in the world, this one dates back 65 million years.

Finn was exhausted by the work and fell asleep on the job. His wife, Oonagh, woke when the heavy sound of footsteps approached and looked out across to the sea to see Bennandonner on his way. She failed to wake Finn so instead covered him with a blanket and pretended he was a baby giant. When Bennandonner saw the size of this baby giant he nearly had the heart failure, as they say in Ireland, and fled in fear, dreading the size of the daddy giant. He ran back to Scotland with his sporran between his legs and Ireland was once again safe.

Similar basalt columns are found in Bennandonner’s cave on the isle of Staffa in Scotland. Experts say they’re formed from the same ancient lava flow that created the Giant’s Causeway but you never know, maybe it’s proof the giants lived.

Hugging the coastline all the way from Larne to Ballycastle, the Antrim Coast Road is without doubt one of the most scenic routes in the north of Ireland.

Stop at some of the villages on the way through the Glens visiting quaint pubs and sites, too numerous to list, and chat to the locals who are frequently armed with more information of the area than you’ll ever glean from a guidebook.