Earth Hour – Be Part of It 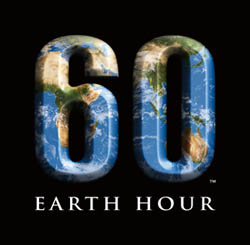 At 8pm on Saturday 29 March 2008 something huge is going to happen. Are you going to be part of it?

Last year in Sydney, Australia, the lights went out across the city for one hour. Restaurants lit candles, offices turned lights off overnight, all non-essential street lighting was switched off; all in an attempt to save some energy. And the world took note.

Two million people took part in Earth Hour in Sydney last year when, according to Energy Australia, energy consumption fell by about 10% which is thought to have saved 25 tonnes of carbon emissions polluting the atmosphere. This year, following Sydney’s lead, 24 cities around the world will take part in Earth Hour with an expected 28 million people being involved. That’s a helluva lot of carbon cuts.

Andrew Jaspan of The Age’s Earth Hour magazine says, “It is the start of a journey, a global one, to halt the irreversible damage to our planet’s climate.”

“A crucial message of the Earth Hour initiative is that each of us can do something; from switching off office lights when we go home, to switching off home appliances instead of leaving them on standby mode.”

The ultimate goal of Earth Hour is not only to change the way people think and act on a daily basis but to show political leaders that the public are seriously behind climate change protocols.

Earth Hour executive director, Andy Ridley says, “We want to give leaders a mandate to go to the UN negotiations in Copenhagen [where it is expected a post-Kyoto agreement on climate change will be signed] and say there are millions of people who support big emission cuts, who want action.”

It doesn’t matter if your home town is on the list or not. The beautiful thing about Earth Hour is that anyone can do it anywhere in the world, in the comfort of their own home. No fuss. No dramas.

This one hour is your chance to make a difference.

Log on to Earth Hour’s website to register interest and get lots more info or find out how to organise your own event.