The Blue Planet Goes On Tour 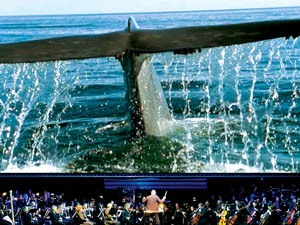 Nature documentary sensation, The Blue Planet, brought the underwater world to life for many and attracted millions of viewers world-wide. It was seven years in the making and cost the BBC an absolute fortune, but it was worth it for this remarkable documentary, narrated by legend Sir David Attenborough, succeeded in grabbing the attention of people who had probably never given a second thought to what was going on every day in the oceans of the world.

The countless breath-stopping, jaw-dropping moments throughout the eight episodes produced die-hard fans the world over and no doubt ignited little environmental activist fires within a few. Now you have the chance to see it again in a bigger and oh-so-much-better format, but unfortunately only if you’re resident in the UK.

The Blue Planet Live is going on tour with a full orchestra conducted by composer George Fenton. Parts of the series will be shown on huge screens up to three stories high. It will be awesome.