All Those Diamonds in Africa

Africa’s troubles sometimes just don’t seem to make sense. It’s a huge, beautiful continent, with mountains and rivers, wide open plains, jungles and deserts. People have lived there long before they lived anywhere else on Earth; the place is rich in culture and history, art and music. And it’s rich in natural resources, too.

“Africa is a major source of some of the world’s most utilized minerals and precious metals, such as gold, copper, diamonds, and coltan (used in computer chips and electronics), as well as oil, natural gas, timber, and coal,” say the bloggers of Geography Awareness Week. But, they add, all those riches don’t seem to bring happiness. “Control over this environmental wealth has in part propagated and funded civil wars, government corruption, and industrial exploitation.” Not to mention that it helped attract all that interest from the colonial powers, whose legacy still adds to Africa’s miseries.

Look a little deeper, learn a little more, and you’ll find your travels much more rewarding… whether you’re going across the ocean or across town. 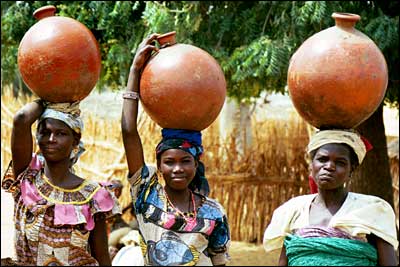 More info:
Africa’s regions, via PBS… the resources of each region are explored.
Diamond Wars, by the New York Times. (As a Conrad fan, I’d recommend especially the story here “In the heart of Africa, darkness,” it’s chilling.)
Oil in Africa, via the Boston Globe.
Water in Africa, stories and pix via the Peace Corps.