In Gabon, on Africa’s western coast, the government a few years ago decided to protect 11 percent of its land for conservation and eco-tourism. The hope is that tourism can provide income for the local people while preserving the forest and wildlife.

The scheme has plenty of skeptics, who worry that building roads for tourists will make it easier for poachers to get into the forest. They worry that the wildlife in the forest is too hard to find and won’t attract tourists, or that an influx of foreign money will bring corruption.

So far, there is still not much infrastructure in place, but the adventurous traveller can find ways to visit the new network of parks.

Gabon is a French-speaking country and has benefitted from oil wealth. Most of the population lives in the coastal cities, leaving the interior forests relatively undisturbed. According to the ecotourisme-gabon Web site, those forests provide homes for 64,000 elephants, 20,000 gorillas, 35,000 chimpanzees, 680 bird species, 320 species of orchids and numerous epiphytes, while the coastal waters host 2,000 to 3,000 humpbacked whales. Rare creatures found here include the lowland gorilla, sun-tailed monkey, mandrill, forest elephant, bongo and the Rock fowl. 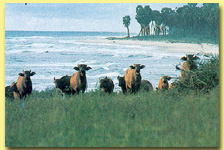 When traveling off the beaten path, it’s always a good idea to check with the U.S. State Department for any active travel warnings. Click here for an info sheet on travel in Gabon.