There’s plenty of nature to see up here on the continents… forests, and tundra, and moutains, and deserts, and all that. So it’s easy to forget that most of the planet surface is covered by the ocean, and there is just as much diversity down there, and most of it nobody’s ever seen.

So to try to remedy that, the worldwide Census of Marine Life is now in Year 6, trying to coordinate efforts to get out there and take a look. This week, the Census announced its results from 20 expeditions this year, comprising “a host of record-breaking discoveries and revelations that stretch the extreme frontiers of marine knowledge.”

They include finding life adapted to brutal conditions around a spewing seafloor vent (the hottest ever discovered), a mighty microbe 1 cm in diameter, mysterious four-pound lobsters off the Madagascar coast, a school of 20 million fish off the coast of New Jersey, and new species living beneath Antarctic ice more than 2,000 feet thick. The pix above show three of the new critters they found.

So how do you, the eager eco-traveller, get out there to take a look for yourself?

If you’re an educator working in the U.S., you may be eligible for NOAA’s Teacher at Sea program. NOAA, the National Oceanic and Atmospheric Administration, coordinates research aboard a fleet of ships it operates around the world. The goal is to give teachers a clearer insight into our ocean planet, a greater understanding of maritime work and studies, and to increase their level of environmental literacy by fostering an interdisciplinary research experience. Deadline for next year’s season is January 31, so if this interests you, get going!

Another option is to sign on with a Tall Ship. The American Sail Training Association lists help-wanteds in its online “billet bank.” Most jobs prefer that you have some sailing experience, but otherwise an excellent work ethic, public relations skills, flexibility and a desire to learn might be enough to get you signed on as a deckhand or apprentice. Many of the ships also offer public programs, where you can pay to join the crew for a voyage. They tell me they’re redesigning their Web site to make that info more accessible, but for now, your best bet is to contact ASTA directly if you want that info. Also, you can find similar organizations around the world, listed here. 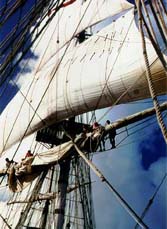 I’ve been involved in both of these programs… in 2004, I sailed on a NOAA ship to explore a seamount chain off the New England coast. And for many years I sailed in ASTA ships, first the brigantine Black Pearl, and later aboard the full-rigged ship Rose. I sailed with the Black Pearl from Newport to Virginia and back one summer, it was my first time on a sailboat. I later sailed many times with the Rose, once taking a group of students for a week-long voyage, and another time a group of geography teachers. The ship went on to movie stardom in Master & Commander, and now lives at a maritime museum in San Diego.

So, if I can do it, so can you! It’s great to be at sea as the member of a crew, though being a paying passenger is the next-best thing, and much lazier. There are lots of ships out there offering various kinds of eco-tours around the world’s oceans, that will be the subject of another post.

More info:
The COML News Release
A story about sailing with the Rose in the Caribbean.