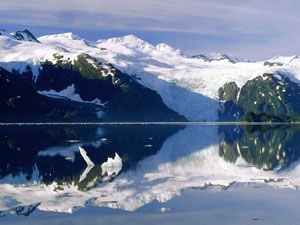 Alaska, the 49th US state, may be cold and relatively barren yet it remains extremely popular with eco tourists keen to view its majestic glaciers and abundant wildlife and with adrenaline seeking travellers; adventure opportunities abound.

Mount McKinley, North America’s largest mountain, in Denali National Park offers exciting routes for hikers and cyclists as do the mountain ranges in the South Central region. Explore the coves and inlets of the Aleutian Islands by kayak, photograph sea otters and puffins on the way, or go inland to watch the brown bears catch pawfuls of fresh fish in the white water creeks and rivers.

There are an estimated 100,000 glaciers across Alaska, some of which are rapidly retreating, experts think due to global warming. The largest Glacier in the country is Bering Glacier which measures around 100 miles long and the most visited, Portage Glacier, has retreated so much it can no longer be viewed from its visitor centre.

Prince William Sound, in the South Central region of Alaska, is the best place to witness glaciers birthing icebergs the size of houses but because it’s such a popular destination it can get ridiculously busy in the summer months with a constant stream of cruise ships ferrying passengers along the coast.

Touring Alaska by cruise ship is very popular as much of the country is roadless; it allows travellers to visit coastal cities with ease and offers a chance to see the glaciers and marine life up close. That is unless you’re on one of the disturbingly huge passenger ships that hold 3,000 people at a time; it would be hard to appreciate the beauty of orcas from a couple of hundred metres high on deck. Opt instead for one of the smaller tour vessels that carry around 100 people. The boats are smaller and can manoeuvre into areas where the larger ships can’t reach allowing for a more intimate cruise.

Alaska boasts 15 National Parks and 121 State Parks, catering for millions of visitors every year. For those eager to avoid the madding crowd visit one of the state parks which are not nearly as renowned and so generally have fewer visitors; Tikchick State Park, north of Dillingham, is the largest at 1.6 million acres.

Gates of the Arctic National Park and Reserve is for true eco-enthusiasts. The park is so intent on keeping the habitat preserved that they have no visitor facilities, campgrounds or dedicated trails and insist on no more than six in a trekking party to ensure the virginal quality of the grounds are kept intact.

If its brown bears you’re after, Katmai National Park and Reserve on Alaska Peninsula has the highest number of sightings from July to August.

ANWR, in Northeast Alaska, is often referred to as America’s Serengeti. The pristine wilderness is home to 45 species of animals including grizzly bears, polar bears, wolves, migratory birds and the second largest carion herd in the world where 150,000 strong give birth to 40,000 calves every year.

It also has one of the world’s biggest untapped oil reserves. This makes it a hot tomato for an oil hungry presidential administration who can’t think of anything better than to get their dirty mitts on it. They must be salivating in their sleep at the very thought of it. Not surprisingly this is causing a backlash among environmentalists and those living in the snow tundra. Thankfully, the US Senate blocked any idea of drilling for oil in 2005 but just in case they change their minds, go and explore this vast refuge before it’s too late.

Spot Beluga Whales on a Bike – That’s you on the bike, not the whales. Set out from Indian Valley, Anchorage, cycling towards Girdwood to catch a glimpse of these elusive animals. Alaska Bike organise small tours throughout the country so you can see more than just whales.

See Alaska by Train – There are a few train services that criss-cross Alaska. Step back in time and flag down the Hurricane Train, the last flag-stop train in North America, or do it in style on the Anchorage to Fairbanks luxury Gold Star Service, Denali Star. View the majestic mountain skyline through the glass roof on the second level of the double-decker train, stopping at Denali National Park on the way.

Northern Lights Spectacular – The Aurora Borealis are free for all to see. The best viewing months are from around September to April; it’s too light from May to August to get a good glimpse of this natural phenomenon that brings the sky alive with a natural neon light show.

Summer Solstice Festival, June 21 – The sun shines for 23 hours a day on the longest day of the year in Alaska. Join in the fun and frolics at the festival which culminates in a traditional midnight sun baseball game.

Places to Stay in Alaska

Alaska Forest Service Cabins – Run by the US Forest Service, AFS has hundreds of cabins around the country for very reasonable prices. Around 190 of the 150 cabins are in Tongass Naitonal Park.www.fs.fed.us/r10./tongass. Many of the same grounds have camping facilities too. Campalaska.com

Sadie Cove Wilderness Lodge – Voted to be one of the top 10 eco-friendly destinations in the world, these luxury cabins in Kachemak Bay State Park were built completely by hand from local driftwood by their owner. The eco lodge is accessible by boat from Homer, Alaska, the bear viewing capital of the world.