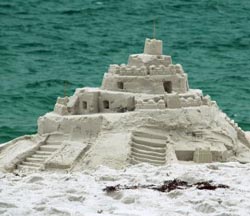 The ocean has been encroaching on our sand castles at a consistent 0.1 millimeters a year for the last 3,000 years. But for the last 14, that rate has increased to closer to 3 millimeters a year. Call it more intense solar activity, greenhouse gases or a liberal conspiracy, there’s a 90% chance of a 21-inch rise in ocean levels over the next 25 years.

A sizable chunk of the world is within 21 inches of sea-level, so in an effort to help you prioritize your travel, we’ve put together a list of the top destinations that will soon disappear if Mother Nature doesn’t fix the thermostat.

There is an inherent increase in consumption and impact on the ecosystem when someone chooses to travel, but that debate is for another time. You’re working with a limited time-frame. These sights will be underwater in 25 years. Get ’em while they’re hot.

The Global Warming Tram first stops in Venice, where some elderly city planner decided that building a beautiful city on a series of sinking islands was the best way to get back at younger generations for playing their harps too loud and wearing baggy togas. Today the city is battling not only steadily sinking building foundations, but it’s having sanitation problems in its canals and rising ocean tides have forced many inhabitants to move out of bottom floor apartments and reside only on the upper levels.

Venice has several plans in place to engineer their way out of this watery redevelopment plan. Inflatable balloons to raise the city a few feet when the water gets rough are in the works, as well as a massive pump system to replace the dissipating sea floor with dirt.

Be sure to: see some of the artwork in Venice’s many galleries and museums. Those oil paints don’t react very well to salt water.

Another city that has modern man avoiding eye contact with nature, New Orleans is propping itself up on its quick-to-recover Bourbon Street tourism industry and today its downtown and French Quarter look as if they’ve mostly recovered. The rest of the city is slower to rebuild, however, and in the decimated Lower Ninth Ward, blocks of houses remain empty even as the first of the displaced come back.

The spirit and mystique of The Big Easy remains intact, however. Street artists and fortune-tellers still entertain and read Tarot cards, top musical talent still frequents the jazz clubs and beads still adorn the immodest each night. If anything, the pulse of the nightlife has quickened as tourists, surrounded by devastation and poverty, seek even greater affirmations of life.

Be sure to: hear the jazz at Tipitina’s where the music community rebuilds itself and makes the road home sound a whole lot funkier.

You don’t need a feature length slide show, laser pointer, or an industrial size lift to see the impact that global warming has had on Tuvalu. This Polynesian island nation’s highest point is 15 feet above sea-level and high tide in some seasons already brings waves flooding over low dikes, giving the town a salt-water gargle and further eroding the disintegrating island.

Although Tuvalu’s population of 12,000 makes it the smallest country by population represented in the United Nations, the series of atolls in the Pacific has become something of the human face of global warming and has been used as an example of the effects of rising sea-levels over and over in international media and in speeches to the UN.

Be sure to: relax, unwind, live on island time. But don’t miss your flight or you’ll be waiting 2-3 days for the next one.

The seven peaks surrounding Bergen invoke images of the Alps or Himalayas, but Bergen is no high-elevation hideaway. The rising tide regularly floods this fishing town’s UNESCO-recognized historic center and increasingly violent weather has caused landslides and other destruction. Concerned residents formed a volunteer rescue force after landslides in 2005 and there is talk of constructing an adjustable sea wall in the harbor that raises or lowers depending on the weather and height of the ocean swell.

The European Capital of Culture in 2000 and one of Norway’s most popular tourist destinations for its fjords, mountains and fishing industry, Bergen and it’s fishermen may soon have to confront the possibility of donning their fishing duds every other year. Climate change affects ocean currents and is contributing, along with over fishing, to the rapidly declining fish population in the North Atlantic. Overall catches have reduced by half since 1950, despite twice as many boats in the water.

Be sure to: see the local fisherman hamming it up and putting on a show for the tourists when the catch comes in. Fish slime for all.

Not only will Bangladesh be unable to rebuild after a catastrophic storm or flood, they’re finding it difficult to do initial building now. One of the poorest countries in the world, Bangladesh and its people are already experiencing damage and destruction at the hands of the weather and facing their upcoming “trials by water” with few available options besides becoming a climate refugee.

Be sure to: see capital city Dhaka and the 17th century unfinished fort outside of its downtown. To the south, the Mainimiti Ruins are an excavated monument to Buddhist thought and culture.

We’ve all seen the animation of New York flooding and we’ve all made the “maybe that will do something about the garbage smell” jokes, but Manhattan real estate values are in serious trouble if the oceans don’t abate their slow invasion of the financial district.

New York slides to honorable mention status because there is enough money on Wall St that the banks and businesses will build a flood-wall around the island out of cash before they will let their billion dollar downtown businesses drown.

Am I underestimating the ocean and overestimating technology’s ability to save us? Maybe, but if I am, we’ll all soon have bigger, saltier problems.

The global warming tour continues on Wednesday with attractions that will not be so attractive once they go the way of Atlantis. Check back for an updated list and submit your own soon-to-be-waterlogged destinations to eco@logueit.com