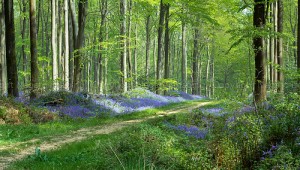 World Responsible Tourism Day was held on November 14 at the 13th
World Travel Market (WTM) in London’s ExCel exhibition centre. It was also the venue for this year’s Virgin Holidays Responsible Tourism Awards, which recognises the efforts of small and large tour companies, individuals and destinations around the world who champion responsible travel.

The overall winner 2007 is The New Forest, an area in Hampshire, England, which as a community has worked for years to encourage tourists and locals to look after the spectacular natural setting.

Driving into the New Forest feels like driving back through the ages. The sky-line is speckled with tatched roofs, ponies and cattle have right-of-way and deer roam freely. Bustling with wild life, The New Forest covers 150 square miles of forest, plains and wetlands and was originally cordoned off as a hunting ground by William the Conqueror in 1079. Laws were put in place at the time to protect the native animal’s natural habitat and local peasants were given common rights to graze their ponies and cattle throughout the forest, cut firewood and turf and allow their pigs to wander the woodland, snaffling acorns poisonous to the ponies. In ecological terms, New Forestonians were way ahead of the game and today locals still vehemently uphold their given rights.

For a time, in the 1970s and 80s, tourism threatened to strangle the delicate balance so carefully sustained over the centuries and tourists were careless, lighting fires and pitching tents wherever took their fancy. So, 20 years ago, the New Forest District Council introduced a strategy to make visitors to the area more ecologically aware and instead of griping about tourists they decided to provide for them, acknowledging, like many holiday hotspots, that tourism ploughs money into the community. A local food network was set up, local businesses employed local people and tourism and the local economy thrived. Commoners now run farm tours or have opened their houses as bed and breakfasts, educating visitors on their way of life. Bike hire is encouraged, discounts are given to those who travel to the New Forest by public transport and there is talk of introducing electric cars for hire in the area.

It’s a stunning place to visit but will only stay so if travellers help those living in the area to uphold the symbiotic relationship that has developed over the years. If you do visit, make sure you try a New Forest Breakfast, a full English hearty brekkie using only local ingredients.