This meerkat farm has been on my list of places to go for a while now…. I’m hoping to do a road trip around the Mojave Desert region one wintertime soon, and I expect that this will be one of my stops. Anyone who’s seen a meerkat can’t help but be fascinated with them. The Meerkat Manor show on Animal Planet apparently is a hit (I haven’t seen it myself, being cable-limited) and National Geographic and Disney are fond of them too. 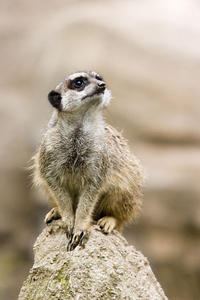 The Animal Planet show seems to indulge in a fair bit of anthropomorphizing, giving names to each of the meerkat clan, and putting the best spin even on their bad behavior — a habit of infanticide, for example, is attributed to the parents’ reluctant decision to give the strongest pups their best chance of survival. But they are so cute and lovable, so lively and charming, viewers seem to forgive them even that. The animals live in South Africa’s Kalahari Desert, and face dangers from deadly snakes, rival mobs, scarce food, stinging scorpions, baking heat.

If you can’t get to the Kalahari, you can visit a meerkat mob at the Fellow Earthlings Wildlife Center just outside Palm Springs, California, about two hours from Los Angeles or San Diego. It’s not a zoo, but a home for unwanted meerkats who are orphaned, or old, or in need of a home for any reason. Visitors who join their Adopt a Meerkat Program can feed, pet, and play with all of the meerkats at the Center during a two-hour visit. The animals will take treats from your hand, sit in your lap, untie your shoelaces, peek in your pockets, and display a cuteness that’s hard to resist.

It’s a nice reminder that the Earth isn’t just for us humans…. a few million other species share this planet, and it’s kind of rude of us to keep forgetting that.