As winter sets in here in New England, the days grow shorter, the sun sinks lower in the sky, and it’s easier to imagine what life must be like in the northern extremes of the planet. One spectacle of nature that you can see there, the Northern Lights, or Aurora Borealis, attracts nature travellers willing to brave the cold and dark to marvel at what our planet can do. 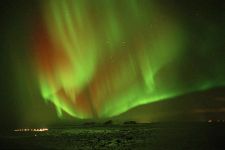 Here in Rhode Island, we’re at about 45 degrees north of the equator. I’ve never seen the Northern Lights here, but occasionally, when there’s a big solar flare or something, you hear they might be spotted this far south.

As you head north from here toward the Pole, the winter days get shorter and shorter, till you hit the Arctic Circle at 66 degrees. This time of year, the sun there barely rises above the horizon, and on Dec. 21, it won’t rise at all. At the North Pole itself, at 90 degrees north, once the sun sets on the Autumnal Equinox in September, you won’t see it above the horizon again until the Spring Equinox in March.

So, the farther north you travel in winter, the more night hours you have for viewing the Aurora. Plus the solar wind and magnetic storms that cause the effects tend to focus on the polar regions, as the particles are attracted toward the magnetic poles. The optimal zone for seeing the lights is about 67 degrees. You can also see them in the Southern Hemisphere, but those regions are much less populated and harder to reach.

So for you eco-travellers who want to add a viewing of the Northern Lights to your life list, sites in Alaska, Canada, Iceland, and Northern Europe offer your best opportunities.

Finland, Iceland, Alaska, and Norway have Web sites devoted to seeing the Lights. The Arctic Academy, in Finland, offers programs devoted to learning about and watching for the Lights. Operators in Canada’s Yukon offer Aurora Tours. Budget Travel suggests some places to stay for aurora viewing, in a story in March.

I’ve been above the Arctic Circle just once, and it was in the summertime. We traveled through Norway to North Cape, the farthest north you can go on the mainland of Europe. It’s a pretty empty place, or at least it was back then, with a high cliff overlooking a wide gray sea. You could look North though, and think, right up there is the Pole….! The sun never set, but it never climbed too high in the sky, and the weather was damp and chilly.

More info about the Northern Lights:
For a glimpse of the aurora experience, check out this YouTube video, for a time-lapse show, location unknown.
The aurora is not just a spectacular sight, but sounds also are associated with the activity. Sound recorder Steve McGreevy explains it all in an NPR podcast. Or go straight to the recordings captured from the low-frequency radio spectrum.
SpaceWeather.com has an aurora watch to alert you when conditions look good for viewing.
A gorgeous photo gallery by Finnish artist Sigudur H. Steffnisson.
More images, from NASA’s gallery.
Michigan Tech’s site includes info on how to build an aurora detector.
Norway’s Northern Lights site has lots of FAQs.