New Virgin Eco Resort to Open in the Caribbean 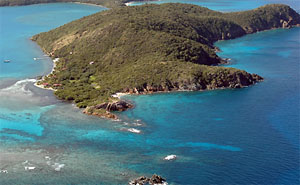 Virgin tycoon Richard Branson has announced plans to transform one of the British Virgin Islands (BVI) into the most environmentally-friendly resort on the planet.

He pointed out to a reporter on a tour of Necker Island (one of his own islands in the BVI) recently that there is no reason in the world why the Caribbean should not be a leader in using renewable sources because they have an abundance of sun, wind and waves, everything needed to generate natural power.

“It is actually inexcusable for the Caribbean to need to use dirty fuels anymore when it has all these natural resources on its doorstep,” said Branson.

The island he is looking to for this possible eco-friendly resort is a little wind-beaten, uninhabited island just off the isle of Virgin Gorda, called Mosquito. Branson envisions an eco enclave of up to 20 villas, along with a beachside restaurant, powered exclusively by wind turbines and solar panels. Food will be grown locally, beach buggies powered by biofuels will be available for people to get around and tree planting will be encouraged to offset carbon emissions.

Mr Branson believes that more governments worldwide should be encouraging and developing their own eco-projects using renewable sources as a way of dealing with soaring global oil prices.

“We’ve managed to prove on paper and now we’ll prove in reality that the Caribbean could run with the determination of governments on solar and wind,” Branson said. “There is no need to continue using dirty fuels.”

Several alternative energy specialists were consulted in the design of the resort to ensure it was as environmentally sound as possible but the BVI Government haven’t given the go-ahead just yet.

As long as the lovely Mr Branson practices what he preaches and uses less “dirty” fuels on his airline then maybe the government might just take him up on the offer.

Whether Mosquito Island can be the most environmentally-friendly resort is debateable. Knowing Mr B’s standard of living, and those who normally frequent his resorts, it is doubtful whether Mosquito Island will be accessible to anyone but the upper echelons of society who, let’s face it, could rarely give a fiddler’s fart about the environment. Heck, they’ll probably fly first class and then hire the most expensive, gas-guzzling yacht available to take them straight to that quaint, but very fashionable seafront restaurant. And, no doubt, when they do they’ll be seriously thinking they’re doing their bit for the environment!

Incidentally, a room in the Great House on Richard Branson’s ridiculously stunning Necker Island is a snatch at a mere $25,400 per couple, per week. Yep, that’s right, some people’s yearly salary. Eco me THAT Batman.