Octopuses Given Toys as Part of Sea Life Study 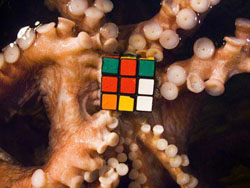 If you’re planning on visiting Europe any time soon, why not get involved in a new mutli-centre study that is to take place in 23 Sea Life Centres across Britain and Europe.

Sea Life is carrying out studies on octopuses to determine whether they favour a particular tentacle for picking things up. Scientists want to test their theory that the intelligent sea molluscs have a preferred arm out of the eight they have to choose from, much like humans favour their left or right hand.

The octopuses will be given food and toys to play with. The tentacle they use to feed and investigate with will be recorded. This is where visitors can get involved; all you need to do is sign a form on entry if you’re willing to participate.

When the octopuses are given their toys, such as a ball, a jam jar or Lego bricks, visitors are encouraged to chart which arm was closest to the object and which arm picked the object up. If the octopus uses a number of arms, they too are to be written down but this time in the order that they touched the object.

Claire Little, one of Sea Life Centre’s marine experts at Weymouth, Dorset, said the study could also help to reduce stress among octopuses. “It will be very interesting to see the results,” she said. “Uniquely, octopuses have more than half their nerves in their arms and have even been shown to partially think with their arms.

“We hope the study will help the overall well-being of octopuses. They are very susceptible to stress so if they do have a favourite side to be fed on, it could reduce risk to them.”

“It will also help towards solving the mystery of handiness in the animal kingdom.”

All results are to be analysed by Sea Life Centre biologists and results will be published in the autumn.

So, if you fancy yourself as a bit of a marine scientist, why not check out if any of the cities you’re passing through on your travels have a Sea Life Centre and get involved. The kids will love it, especially.