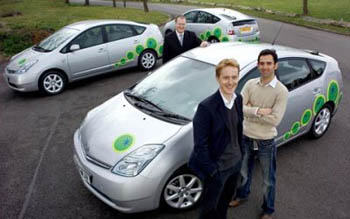 If you spent years training to be a corporate lawyer and had a great steady income, would you leave it to undertake a harebrained scheme that only your mum and girlfriend believed in? That’s exactly what Tom Pakenham did in 2006.

He had the idea of starting an eco-friendly taxi company and so with five environmentally-friendly cars Green Tomato Cars was born. Now, only a few years later, the company has a fleet of 60 Toyota Prius Hybrids.

When the company started in 2006 Tom admits, “Only my mum, girl friend Sophie, now my wife, and Jonny (his business partner) were 100 per cent behind the idea of launching London’s first green cab service.”

His city lawyer colleagues thought he was an idiot for leaving his job. “But that’s because most of them didn’t believe that the environment was all that important – and had never worked as a corporate lawyer!”

Tom, who sold his £150,000 flat to raise money for the venture, has the backing of high profile celebrities, Buckingham Palace officials and BSkyB executives. Even climate conscious Al Gore is a fan.

Currently carrying 500-600 passengers a day, Green Tomato Cars are a shining example that commercial success and green issues are compatible.

“All our drivers and employees are recruited from the local community. We use local garages, service agents and vehicle sign-writers even though that is not always the most competitive option.

“To bring green products to the fore we believe we must not be more expensive, nor inferior to conventional equivalents.

“The target is to be recognised as No 1 provider of environmental goods and services in London and around the world.”

All their hard work has paid off as The Department for Transport has acknowledged Green Tomato Cars progress by giving them the Fleet Hero Award and last year the company was highlighted at the WTM 2007 World Responsible Tourism Day.

Delighted with the publicity, Tom says, “I like to think we are playing our part with the cars flawlessly switching from petrol to electric when driving conditions allow. Carbon dioxide reductions of more than 300 tonnes have been achieved and this low footprint has sparked a revolution in the taxi world.”