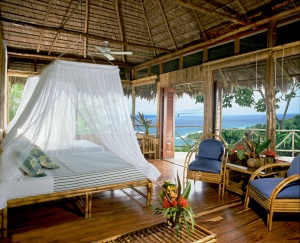 With the jury being out on whether offsetting carbon emissions actually works, a carbon neutral break seems only to be likely if you choose to cycle to an eco lodge in your own country, but not so, according to new Costa Rican tour operator on the block, Nature Vacations. They claim to be offering “the world’s first and only carbon neutral vacation” at a luxury ecolodge deep in the heart of the Costa Rican rainforest. But is it?

Staying at Costa Rica’s only two hotels to be awarded five green leaves from the Certification for Sustainable Tourism, Finca Rosa Blanca Country Inn overlooking the Central Valley of Costa Rica and Lapa Rios Ecolodge in Central America’s last remaining lowland tropical rainforest, visitors will have the opportunity to plant a seedling as part of a reforestation programme and learn of the medicinal properties of the forest on a sustainability tour. The vacation includes being ferried by a bio-diesel fuelled van and carbon neutral airline, Nature Air. All carbon created from the trip will be offset and committed to reforestation projects on the Osa Peninsula.

Hats off to them, it sounds like a fabulous trip, and should be with prices starting at $2,500 per person, but the sceptic within can’t help thinking that surely to do this wonderful carbon neutral tour a flight to Costa Rica would be involved which negates the whole idea, unless you’re already lucky enough to live there. So maybe their claim to being the world’s first and only carbon neutral vacation is slightly off kilter, that and the fact that there at least two other eco tour companies who have already laid claim to the first and only carbon free holidays.

However, it is great to see an airline taking the lead and doing something to offset the effects of flying. People may argue that not flying at all would be better environmentally but it needs to be addressed in relative terms; there a lot of things far worse than flying. Take for example the oil and gas industries or the cruise liner industry, both do far more damage than flying but air travel seems to be taking the brunt of the carbon emissions argument, which no doubt is fuelled by those in other polluting industries in an attempt to keep them from being more closely scrutinised by the general public.

People will always fly as long as there are flights available therefore Nature Air provides a decent alternative. Hopefully other airlines will eventually follow suit.

Escape Adventures This popular tour company is working hard to become the “world’s first carbon neutral outfitter” and has already been named the “World’s Best Outfitter” by National Geographic Adventure for range of bike tours they offer.

Luxury Gites in Rural France Offering luxury traditional accommodation in the heart of the Poitou-Charentes region of France, Les Cygnes is an eco-friendly family-run business employing a number of sustainable measures to achieve carbon neutrality.