I’ve just returned from a camping and canoeing trip in Victoria’s Lower Glenelg National Park and to my surprise I enjoyed it a lot more than I thought I would. The weather was fine, even though it’s going into autumn here in Australia, the borrowed tent was plenty big for two and I had the time to finish a whole book – something that I’ve been missing of late.

Lower Glenelg National Park (LGNP) sits in the south west corner of Victoria, just shy of the South Australia border. It covers an area of 27,300 hectares and is home to a pretty impressive array of Australian wildlife. Emus prance around like extras from the corps de ballet, their spindly legs carrying great feathered tutu-like bodies, wallabies and kangaroos play chicken with cars and 4x4s, koalas hide high in the tree tops, playing their own version of where’s Wally and the possums sniff around at night seeking spare morsels of food from unsuspecting campers not used to their giant eyes and pleading wiley ways.

The Glenelg River, the main attraction for both visitors and wildlife, is home to a variety of critters, all dependent on its ebb and flow. Swamp hens, platypus and water rats nest on the banks while the many varieties of fish and marine life enjoy the rich waters that flow from its source in the Grampians, 400km upstream.

The area is very popular for camping and caravanning breaks and has strict rules to ensure it’s kept as wild as possible. Everyone who plans to stay the night registers at the tourist office in Nelson where you’re allocated a pitch and can discuss the best places for walking, fishing, canoeing and swimming. It’s possible to hire canoes, kayaks and boats on the pier just beside the tourist office and fishing licences are available at the BP station back out on the main road. A two person canoe and paddles, including delivery and pickup, came to $170 for three days (US$156); really quite reasonable. 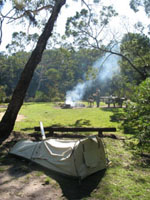 Many people visiting LGNP choose to start at one campsite far up the river and canoe to their next campsite the next day. If there’s any chance you’ll end up in the river instead of on it, hire large plastic drums with your canoe to ferry all your belongings about. But because the river is so calm it’s not particularly necessary.

All the campsites have dedicated, numbered pitches, so there’s no squabbling if you end up sharing with strangers, and all of them have a rainwater tanks for water but it’s not drinkable. We made the mistake of not bringing any water with us on the first night and found that even the water from the river seemed better than the cooled boiled water from the tank.

There are toilets at every site too. Ours were long-drop toilets and were honestly above and beyond what I expected; there was even non-scratchy toilet paper on the roll with a spare sitting nicely wrapped among the cobwebs beside it. Those used to the finer things in life might gag a little but when you’ve been to as many festivals as I have and observed first-hand what long-drop portaloos can be like these are relatively luxurious.

Campfires are allowed but only in the designated areas and only when there are no fire-bans in the area; you don’t want to be responsible for a bush fire! LGNP allow people to collect fire wood within the park but it means upsetting little mini ecosystems that have settled under fallen branches etc. There are bags are fire wood available to buy in the mutli-talented BP station in Nelson.

LGNP is bush land. It’s wild. So this means that any visitors to the area have to take what they bring. Leave the campsite and river in the condition you would expect to find it and leave no trace as all good ecotourists and eco travellers would.

If there’s just one thing I’d like to recommend from this trip, and something I’ve never done over a period of time before, it’s canoeing on a still, slow moving river with nothing but the sound of the birds in the trees and the sun shining on your face. At times, if I imagined hard enough, I could hear my river cruising theme in my head, a tune I’m saving for the long-awaited moment I paddle down the Amazon, but I almost heard it. Those little moments are worth the chilly nights huddled in the tent, the cramped up mornings and flying termites in your dinner.

There’s more to LGNP than I could relay in one posting so visit their website for more information. And if Australia is a bit too out of your way, look up your local national or state park that offers canoeing. It will be worth the effort.