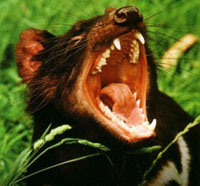 The world’s largest marsupial carnivore, the Tasmanian devil, was officially declared endangered on Wednesday due to a contagious and ultimately fatal facial cancer.

Spread through biting, the tumour works its way across the animal’s face and mouth which prevents it from eating, often resulting in death within months.

The fast-spreading disease has already reduced numbers by around 60 percent and threatens to wipe out the carnivorous marsupial within 10-20 years if not contained.

of the disease. “The disease we are fighting is one of the few cancers in the world known to be directly transmissible,” Llewellyn said.

“In many ways it is defying what is commonly known about disease, in that it is not petering out in areas where it has been for a long time.

“This upgrading really reminds us of what we are up against in our efforts to ensure the ongoing survival of the species in the wild.”

the Australian and Tasmanian governments are already supporting a programme to ensure healthy populations of devils not yet exposed to the disfiguring disease are in quarantined locations.

Llewellyn said, “We are developing and implementing an insurance strategy which has established captive populations around the country, (and) implementing wild management trials to attempt to secure wild populations.”

Once found throughout Australia, the Tasmanian devil has been confined to Tasmania for about 600 years. Early European settlers attempted to eradicate the species but conservation measures since the 1940s have eased its demise. The biggest threat to the devil now is disease.

Visit Save the Tasmanian Devil website to see what you can do to help.